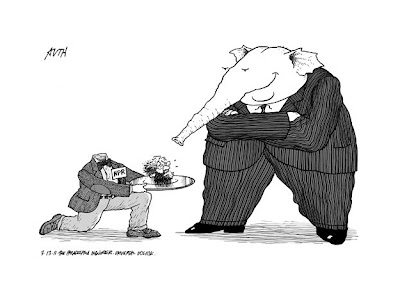 Listed below is a letter written from Senator Richard Shelby to Chairman Tom Harkin wherein he suggests that the reasoning behind his desire to deprive NPR of funding is because of some unfortunate remarks made by Ron Schiller, Senior Vice President for Development at NPR. Cutting through the bullshit, I have to wonder how the Republican machine was prescient enough to know Mr. Schiller would, frankly, be ridiculous enough to ramble on so unfortunately, when they decided months ago to attempt to deny funding to NPR.

It's obvious that, with the incredibly Right leaning corporate media, led by Fox News which has done a relentless job tilting coverage and tone in the news to their perspective, Republicans would want to eliminate any possible competition for informing the American public.

The reasoning is no mystery. There has been an unholy union between greedy corporate friendly, fiscal conservatives, and dogmatic, religious zealots since the Reagan administration. Both groups are willing to win at all costs, the ends justifying the means. And total control of the mainstream media message is a powerful tool. So, even though, compared to most other expenditures 2.9 million dollars is pocket change, Republicans are going after NPR. Hell, 2.9 million is a drop in the ocean of our debt. So why, in God's name,would we not focus our attention on the many larger problems? It's obvious. The power base has shifted in our country.

At one time we had a king. And we threw him off, then we had powerful men, and groups of men that controlled our country through the control of resources...wait...I guess we can stop there. Does ANYONE actually believe that corporate money does not buy most politicians? Aside from a few noble, patriotic men and women willing to risk great injury and experience incredible sacrifice by throwing themselves into the newspaper game and trying to publish a small,local newspaper free of corporate bias (shameless self promotion), most of the media is business first. And corporate business is, after all, making money for the shareholders.

That 2.9 million dollar figure mentioned above is important. Of course It's not that 2.9 million is pocket change to an individual. I'm sure we could think of plenty of our bills, and our friends' bills, we could pay with that. And yet, ah yes, the unfortunate math, 14 trillion. I'll assume you know what my argument is so I'll not repeat it.

America will recover financially. Even if our economy falls from number one, we have become a power broker like no other in history, like nothing our forefathers could have dreamed of. So then, what rights will we give up on the way to that recovery? We are destroying the public schools. We are destroying freedom of the press.

We have destroyed habeas corpus, and many other civil rights. Republicans are after total control. They are making a power grab, lusting for the ability to ravage unencumbered by an informed public.

Mark my words, the Republicans are after your soul. This you better believe. You better make damn sure you believe every single thing they stand for when you give it to them. Because, like everything else they touch, they will take it all.


Below is from Senator Shelby's office:

We are writing with great concern about the remarks by Ron Schiller, the Senior Vice President for Development at National Public Radio (NPR), at a recent meeting regarding funding for NPR. Mr. Schiller expressed biased and highly questionable comments that we hope are not shared with NPR leadership. Further, he represented to potential donors that NPR would be “better off” without federal funding. In this time of fiscal austerity, we should make wise investments and direct scarce federal resources to organizations that will use this funding to serve the needs of the nation. It is clear that Mr. Schiller’s comments do not reflect the majority of Americans’ views and call into question what NPR stands for.

Therefore, it is our intention to look at all available appropriations vehicles to discontinue funding directly related to NPR programming. NPR receives funding from the Labor, Health and Human Services, and Education (Labor/HHS) Appropriations bill through the Corporation for Public Broadcasting’s system support account, radio programming, and community service grants. NPR received roughly $2.9 million in the fiscal year 2010 Labor/HHS Appropriations bill and it is our intention to work with our colleagues to terminate funding for NPR.

We look forward to working with you to ensure that federal funding is being spent in the best interest of the American taxpayer.