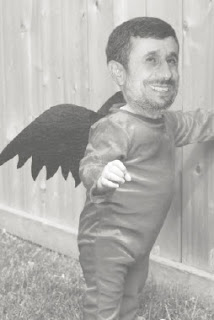 On October 11, FBI director Robert Mueller called a press conference to announce that a sinister plot by Iran to assassinate Saudi ambassador Abel al-Jubeir with the help of a Mexican drug cartel had been foiled. The whole thing was described as a James Bond-type operation that Mueller said “reads like the pages of a Hollywood script.” The assassination was to take place in Washington D.C. and involve the bombing of both the Saudi and Israeli embassies. It was big news for about 24 hours and then disappeared from the American press in favor of more important things like Kim Kardashian’s divorce. The rest of the world continued to report on the story with an air of skepticism and Iran called the whole thing “laughable.”

We Americans have to have a boogieman. And that boogieman has to be totally irrational and pure evil. There is nothing too far fetched that you can say about the boogieman that the American public won’t buy into. As we continue to downgrade our military presence in Iraq and Afghanistan the boogieman is starting to look more and more Iranian. Why would Iran take such a foolish gamble that might very possibly result in military retaliation by a trigger-happy U.S. that loves to watch explosions on television? Why would they be so careless as to deposit large and easily traced sums of money into a dummy bank account set up by an FBI agent posing as a Mexican hit man?

One of the two suspects in the alleged assassination plot is Manssor Arbabsiar, a 56-year-old naturalized U.S. citizen and used car salesman who has lived in Texas for over two decades. Arbabsiar isn’t particularly religious and is known to be a heavy drinker who frequents strip joints. His boss described him to the Voice of America as “a simpleton who failed at even the most menial tasks.” This is not your typical James Bond villain. Arbabsiar was arrested at J.F.K. airport and has pleaded not guilty to the plot, though his “confession” is the primary evidence for Iranian involvement. The other suspect is Gholam Shakuri, who the Department of Justice claims is a member of Iran’s elite Quds Force and Iran claims is a member of an exile group whose aims are to overthrow their current government. U.S. officials maintain that the plot was orchestrated from the upper echelons of the Iranian government.

On November 18, the U.N. General Assembly voted to condemn the alleged assassination plot. The unbinding resolution was introduced by Saudi Arabia and passed with 106 votes in favor, 40 abstentions, and 9 votes against. It didn’t directly accuse Tehran of involvement but rather condemned “terrorism in all its forms and manifestations.”

As the American media seems to have lost interest in what, if true, should be one of the most dramatic foreign policy crises in recent memory, one has to wonder what really happened. Republicans are constantly threatening to bomb Iran. If they were looking for a motive to start yet another war they haven’t pursued it... yet. Possibly the whole thing is just a comedy of errors. Are all terrorists incompetent boobs? Must the American public periodically be entertained with a series of failed plots to justify our wars and suspensions of liberties?

If Iran really tried to pull off this assassination plot their motivation could only have been suicide. Conspiracy theorists point to Israel stirring the pot of antagonism between the U.S. and Iran. Possibly. That makes more sense than some incompetent used car salesman leading a secret life as an international man of mystery. More than likely the whole plot can be placed squarely on the lap of the shape shifting lizard people that secretly control the world. The only real question is “what are they up to this time?”