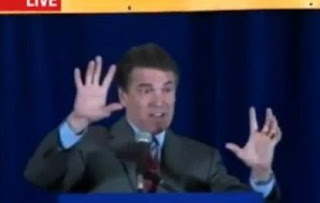 Watching Rick Perry's bizarre performance at the recent Cornerstone banquet, in Manchester, N.H., I found myself profoundly grateful to the governor for having done such a fantastic job of taking himself out of contention for his party's presidential nomination. Well, once I left off laughing, I was.

If you haven't seen the speech yet, it's almost impossible to describe. Perry giggles and bounces on his toes, gesticulating wildly. He loses his place in his speech, has to take long pauses to remember what word or gesture is supposed to come next. At one point, discussing New Hampshire's state motto, he exclaims, "This is such a cool state, c'mon, live free or die? Ya gotta love that!" Sounding more like a frat boy near the end of spring break than an actual adult, let alone a presidential candidate, Perry goes on to say something semicoherent about the Alamo, and slogans, finishing big with, "Live free or die! Victory or death! Bring it!" the first two, of course, reference the state motto again, and then the Alamo. The last calls nothing much to mind, just the second President Bush's infamous mission accomplished challenge to evil doers, only that was, "Bring it on!" so it doesn't quite work. I'm not sure what he was getting at with that one, but then, the governor probably isn't either.

There was another semicoherent rant, something to do with fundraising, in which Perry announced, "Gold is good!" once or twice. I'm not entirely clear as to what he meant, but I have to admit, it would make a great catch phrase for the reality TV show I'm ardently hoping is in his future.

Perry finished big, with more maniacal grinning, shouting, "Today has been awesome!" He could barely contain his joy at being presented with a small jug of maple syrup. Then it was finally over.

The truly mesmerizing thing, though, isn't anything the governor said or did. It's the gleam in his eyeballs. The incoherence coupled with so much energy. An overall demeanor I expect to see in myself at 3 am, after a busy, varied night out. Or in someone else, about halfway to complete insanity. Not in presidential candidates touring New Hampshire.

The temptation to speculate as to what exactly Perry was up to proved too strong for pretty much every cable news personality, or viewer. Not even Fox news could resist. Of course MSNBC's lone conservative host, Joe Scarborough, was all over it.

On his Morning Joe, Scarborough referred to Perry's, "truly bizarre behavior," suggested Perry might have had a few drinks before his speech to loosen up a little. His sidekick, Mika Brzenski, rambled on a bit herself, saying, "It just makes you think, that's all. There's not a law against thinking someone was acting completely loopy and wondering ... if they were maybe ... I'm wondering." If you're too loopy for Mika, something is very, very, wrong.

Later, on Fox's The Five, Greg Gutfield said, "That reminded me when I take an Ambien and have a scotch." In co-host Bob Beckel's opinion, "That looked more like shrooms." Andrea Tantaros thought, "He looked unstable." Former Bush Press Secretary Dana Perino, an old hand at defending the indefensible, thought Perry had just gotten overexcited. She might even believe it. She never did seem all that bright.

One friend of mine similarly suggested the governor might just have been overtired. I am intimately acquainted with the effects of lack of sleep upon a human brain. This wasn't that. Another described him as a, "stoned bumpkin with suppressed dreams of being Jeff Foxworthy." If there's anything more tragic than having suppressed dreams of being Jeff Foxworthy, I can't think what it would be. Others called Perry an unwatchable bitch, a bobblehead, and reminiscent of both George W. Bush, and Mr. Rogers. Gawker thought he seemed awfully gay, thanks to the giggling, and the uncharacteristically lisping overenunciation,
The most specific idea was, "benzodiazepines, some Inderal to stop the shakes, valium, and three fingers of Wild Turkey."

The last is closest to my own best guess. What with all the goofy grinning and eyebrow waggling, the giggling and the bouncing, I'd say there was a combination of uppers and downers going on. Maybe Perry overdid some kind of something or other on his own— benzos, painkillers, or some Wild Turkey—the possibilities are endless. Some overachieving staffer noticed his boss was not quite right, and gave him a handful of his Adderall, or Ritalin, or Dexedrine, hoping they would pull him through the speech. This clearly did not turn out to be the very best of all possible plans.

It wasn't all fun and games in Manchester though. Perry did manage to get across the basics of his plans for tax reform. Taken together, they amount to a declaration of war against the middle and working classes. It wasn't that he said anything new and different, just the timely reminder of who he'll be when he sobers up.

There's the ill considered, implicitly regressive, 20% flat tax. Hurriedly concocted in response to Herman Cain's 9-9-9 plan, this will be optional, at least initially. Perry's big argument for this one is its simplicity. Who cares if a tax plan unfairly distributes the tax burden, if you can fill out your return on a postcard in two minutes?

Perry also plans to eradicate the estate tax, saying, "The death tax expires before you will expire." He further vows, "You can wave goodbye to the capital gains tax, and the dividend tax." Considering that the estate tax isn't applied to any estates of less than $5 million, and many of the very, very, rich pay only capital gains and dividend taxes, this will lead to a radical redistribution of wealth towards the top. Fortunately, 1% can't make up an electoral majority. But they do tend to have the best drugs.