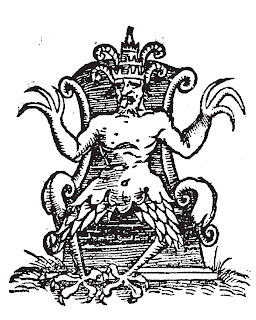 Once upon a time, in a land far away, there was a country whose gross national product was its citizens.

These people were truly disgusting, and the feeling of being repulsed throbbed in direct proportion to how much closer one got to a Southerner. Because this giant country was cloven in two, people naturally acquired the courtesy all decent, God-fearing citizens have for separating themselves on the pettiest stupidity so that a Yankee could look down on a Redneck because Yankees only despised your low class, while that idiot Southerner hated your skin color.

Both had opinions on everything from abortion to glue, to how many licks would it take to make a Republican vote blue, that they blurted even in sleep their cherished ideas each clutched like a blankie, so soothing was the sound of Hearing One’s Own Voice.

Thus did the Goddess Baubo grow to detest her creation: Man.

“Meh,” thought Baubo. “I’ve created a monster” and this mischievous god with the heart of a sadist that gave us the platypus, kudzu, and Benin summoned the demiurge named Gendanken.

“Gendanken”, she said, “I have a mission for you. I’ve grown tired of Man. He’s a scoundrel who’s stolen my laughter, and I wish him destroyed.”

Gendanken listened with the fear of Jonah scratching the days on the flesh of a whale’s anus.

“What do you wish me to do?” asked a timid Gendanken.

“Live among them,” replied Baubo. “Observe and write a report on their worth. On that, I will decide whether to destroy such a dumb little creature. Go.”

And so Gendanken flew down to live among men, walking the battered roads of their mind, settling among a clot of Southerners watching the playoffs. Here, where women cackled like chickens and laid eggs they called ‘men’, she found a strange people far more educated on “punts” than they were “punctuation.”

They were loud, rude, and obnoxious; they fried butter and used words like yonder. They passed laws outlawing employment, then whined that work was not being employed; laws that barbarized humans as “aliens,” yet alienated humans with a barbarized understanding of law.  Not above dragging the past from its swamp, the Southerner made old laws into new ones again by garnishing their language with modern vocabulary, like plucking a dead fish from a bog and sprinkling the nasty thing with a ransom of spice to camouflage the foul odor. Strange above all, Gendanken noted their sewers and realized these people somehow managed to make defecating the most expensive activity in the world.

She met a mayor who sold his city for a Rolex; she met pudgy little lobbyists paying millions to teach senators that c-a-s-i-n-o is spelled b-i-n-g-o, education directors no different than children, and an illiterate hobbit who was voted to the state senate because, though he’s a liar who’d steal a quarter off a teacher and then all the children, it’s obvious to any good Christian his moral authority with a name like Shadrack McGill. And, so, Gendanken grew  hateful as she could no longer believe anything in this insane little city, and therefore the world, was worth keeping alive.

So, a period away from signing Man to his doom, she heard a curious sound through a window. Peering in, she found people hunched over a keyboard. To her delight, the tapping noise was that lovely music of writing. This meant that in a hungry sea of stupidity swallowing the last of the sane, a tiny island persisted where men fought the madness with an armada of humor and, above all, curiosity and thought. She discovered they were writing this newspaper, a little attempt at breaking the sameness and glut. This paper you hold embodies what Mark Twain wrote about horses:

“It were not best that we should all think alike; it is difference of opinion that makes horse-races.”
Gendanken, in short, discovered she could not wish mankind destroyed.

Not knowing what to do now that she found such a people, she decided to shred her report and instead collected all the metals and stones in the world.

And from this mongrel diversity of precious stones and base metals, she cast from a mixture of mud and gold a most beautiful statue studded with diamonds and gravel.

Gendanken then flew back to Baubo and handed the Goddess this statue and asked her, “Would you destroy such a statue?”

And Baubo, her sharp tongue for once blunted by the glow of being surprised, only wept that she ever wished to destroy Man.

Who would destroy a beautiful statue simply because gold is mixed in with mud?

This is what little Gendanken taught Baubo, a little lesson on diversity: value is an appraisal of opposites. Intelligence shines brightest among bigots.